12 Best Currency Pairs to Trade in Forex for Beginners

12 best currency pairs to trade in Forex for beginners are:

The table below shows you all 12 currency pairs to trade in Forex which you can use as a beginner or advanced trader.

It shows you the average pip move per trading session during a day. The information shows you which one has highest pip volatility per day so you can select the fastest and the slowest pair.

EURUSD have different pip range on each trading session in a day and on each day in a week.

First on the list is the most traded currency in the Forex market. It has moderate pip range and the pair is volatile enough to be traded.

London and New York trading sessions are the most volatile because traders from Europe and the U.S. trade their own currencies.

And what is visible is that overlap between trading sessions always has an increase in pair volatility. That is because more traders are active at the same time. 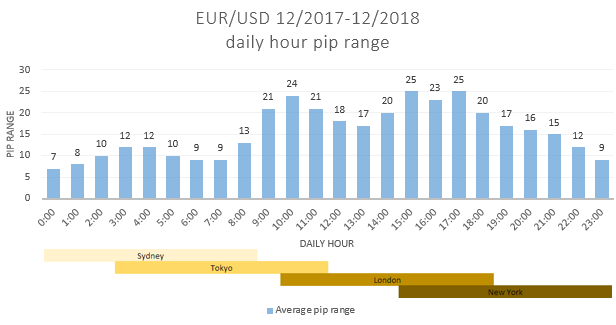 For you this is a pair to trade because you can watch the central bank of the European Union when it intervenes. When that happens you will see currency pairs move which you use in your favor.

This is a minor pair because it does not include the US dollar. It is made up of the Euro and the British pound.

What you can see on the graph below is that the pair is volatile and the best time to trade the pair is during the London and New York trading session.

By closing the London trading session the market becomes more and more quiet because EUR and GBP are European currencies and therefore the volatility is lower when trades from Europe are not active. 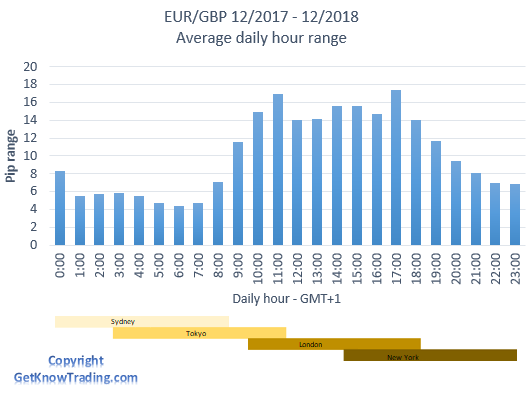 Because of EUR and GBP as a world currencies you can expect to have low spread on this currency pair which makes EUR/GBP an attractive pair to trade.

So try to avoid trading outside European trading session. 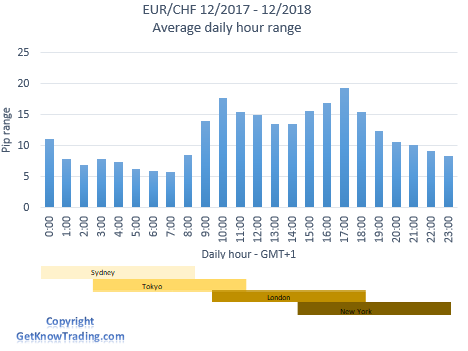 Overlap between Asian and European and then Asian and U.S. session makes this pair tradeable all day.

The volatility is nice and one of the highest between 12 trading pairs to trade.

Spread is moderate because it is a minor pair, but it is doable and traders can trade the pair with nice profits and low costs. 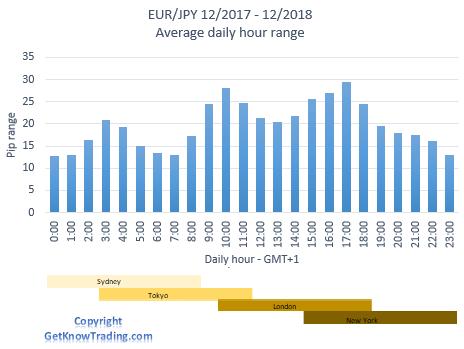 This pair is affected by the political sentiment between the U.S. and east part of the globe. So, in your trading you can use the pair to analyze it by fundamental or technical analysis.

The graph below shows you that the highest pip range is when the London and New York overlap happens.

Similar pip range is also when the Sydney and Tokyo trading session overlaps because traders from the Asian session trade Japanese Yen and consequently the pair have increased volatility. 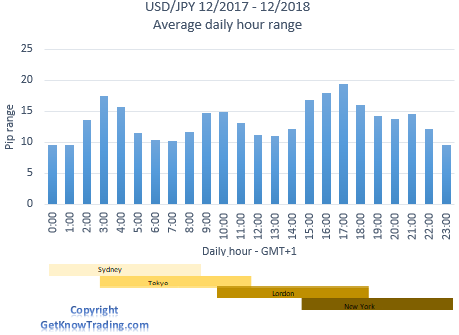 Why is USD/JPY a good currency pair to trade is because the pip range is volatile during the whole day. You can trade it during any hour of the day, but it is good to point on the London/New York session..

What you could conclude from the graph below is that the pair is mostly traded during the New York session. And the reason is that the currencies are from North America so other parts of the world trade the pair less.

Also, what is good about this currency is that it is closely connected to oil price change. Canada exports Oil to the U.S. so if the price of oil changes the value of Canadian currency will change also. 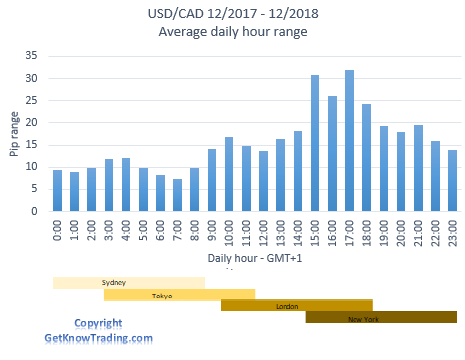 U.S. and European currency and major pair give you a trading opportunity on the overlap between London and New York trading sessions.

Outside these two trading sessions it is best not to enter into the trade because the pip range goes below 10 pips per hour. 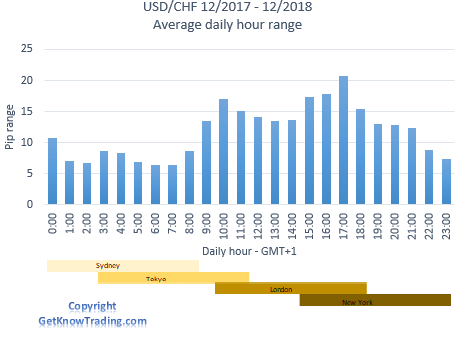 This gives you information that the pair is good to trade whenever you want and you will have volatility. To have more pips to trade you should watch the overlap between trading sessions. 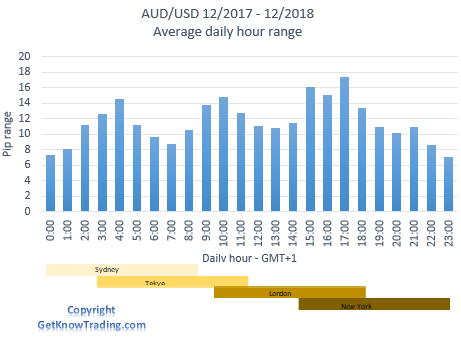 AUD is active on Sydney trading session and it is correlated with the commodities market because Australia is one of the largest exporters of coal and iron ore. Pay attention when there is fluctuation in commodities because AUD will follow the change.

One of the pairs that have a nice pip range during all trading sessions. With an average pip range above 15 pips per hour gives you a good opportunity as a beginner to trade the pair.

Even if you are in the Asian or Europe or U.S. trading session you are able to trade this pair with almost the same pip range in each session. 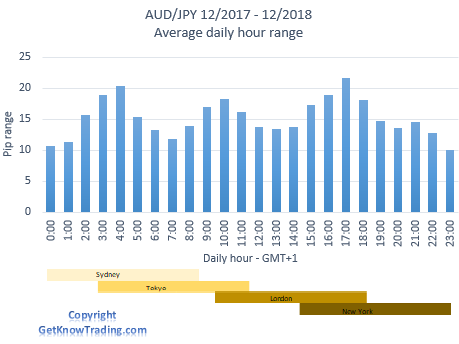 One more pair which is a nice pair to trade because of volatility on each trading session.

New Zealand dollar and U.S. dollar gives you good trading opportunities and spreads because it is a major pair.

Both currencies are affected by their central banks so you can use this information when trading. When central banks act in some way on the market you can take that information in your advantage and predict future pair movement. 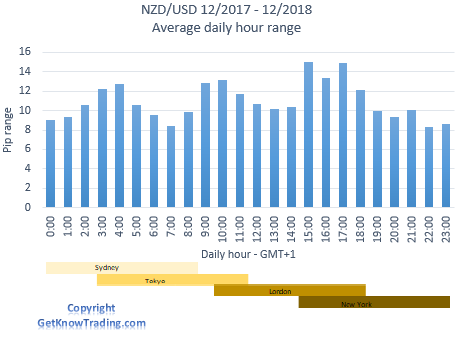 One of the volatile pairs, GBP/USD is highly traded between London and New York sessions. Very low volatility is on the Asian session when the pair do not have much trading activity. 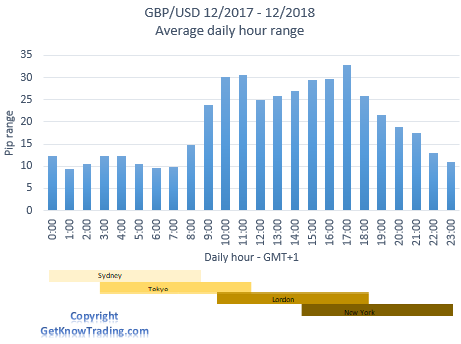 The last one in the list and the pair with highest volatility measured.

With a pip range between 25-30 pips per hour on average is the most volatile pair.

If you trade this pair you can expect a lot of movements.

One of the crucial things trading this pair is to have good risk management and not to use large lot sizes in trading.

Pair tends to make sharp moves which can hit stop loss level if it is set too close to the current price. 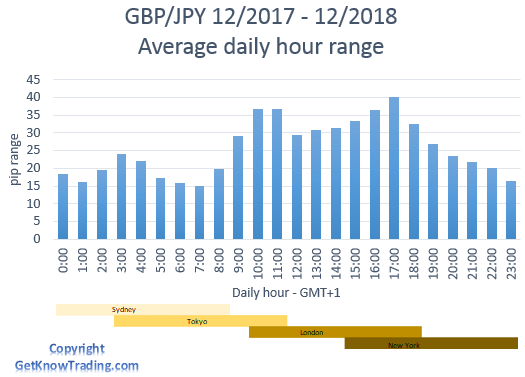 What Are the Types of Currency Pair To Trade?

This is a part you should be familiar with if you are not and that is about the type of currency pairs.

Major pairs are the most popular type of currency pair to trade. They always include the US dollar in the quote and they are the most liquid. That is, they provide the trader with the greatest ability to trade that pair on the Forex market.

Minors do not include the US dollar but do include one of the other major global currencies like Euro, GBP.

They are less liquid than major pairs and there is less available data on these currencies.

They have a higher spread which is not a good option for a beginner.

Where is the difference compared to minor pairs?

A minor must include one of the major currencies (for instance, the Euro), whereas a cross is made up of any non-US dollar currency.

Therefore, a minor is a type of cross pair. So they also have high spreads which can be really hard to trade.

What Makes a Good Currency Pair?

Currency pairs have several characteristics and one of them are liquidity, volatility, spread and strength.

Some currency pairs have high liquidity and volatility and low spread.

Some have small liquidity and volatility and large spreads.

You as a trader should look for currency pairs that have high liquidity. Because those pairs you will be able to trade. They will change the price in the market and many traders will trade them.

When that happens it means you can be sure that when you activate sell or buy order you will be able to make that transaction. It will not happen that your order is rejected or your experience requote because there are not traders in the market willing to accept the other side of the trade.

Then you need volatility and that means the currency pair will change the price often. With price change you can make money.

If the price does not change at all, stays all the time in the place, then you will have a hard time making money.

Volatility means the pip range of the pair is high on a daily time frame.

And the last one is spread. Spread is the cost you pay on each trade you open. You need to minimize that cost and that is by using a small spread.

The best liquidity, volatility and lowest spread have major currency pairs in the Forex market.

You can use currency strength meter to determine which is strong currency at the moment. With that information you can decide will you buy or sell the one currency against another.

Most Popular Currency Pairs to Trade for Beginners

As a beginner in trading you will for sure trade USD and EUR currency in pairs with other currencies. The most traded pair is EUR/USD currency pair.

Others you can trade are AUD/USD, EUR/GBP, USD/JPY, GBP/USD which will have the best spread available on the market.

Your goal as a trader is to lower your costs and that is by using smaller spreads as possible.

Spread you should look for is from 0 – 2 pips on major currency pairs.

What Time of Day Will You Trade?

What you can see on the graphs on each currency pair here is that time of the day affects the pip range and your trading.

Using less volatile pairs can make your trading harder because you will have a hard time to make money or to enter into the trade.

The best currency pairs to trade in Forex are the ones who have high volatility and the volatility is at its highest on London and New York sessions.

If you are in the Asian session then you should pay attention to trade Japanese Yen and Australian dollar with New Zealand dollar. That way you will have more chances to trade volatile pairs.

This is the list of the best currency pairs to trade in Forex. You have their pip range which can help you determine when is the best time to trade pairs.

But, other things to watch when trading currency pairs is to find pairs that suit your trading strategy.

For example you may use trending pairs. The pairs that follow the trend will be better. EUR/USD is the pair that makes a trend so it is good for trading with trend lines.

Other pairs respect support and resistance lines which are helpful tools in trading. One of those pairs is EUR/USD, USD/JPY and GBP/USD.

I hope this will help you choose currency pair to trade and be profitable.

1. All About Currency Pairs

How to Choose a Currency Pair in Forex

What is Forex Currency Exchange

12 Best Currency Pairs to Trade in Forex for Beginners

How to Measure Dollar Strength

What is GJ in Forex – GJ Meaning

What is CFD in Forex – CFD Meaning

What is XAU in Forex – XAU Meaning

What is GU in Forex – GU Meaning