If we check previous analysis we can see I have mentioned several things. First one is that we could see the price returning back down to $1.09860 which is support for the price. And the price has done that.

On Monday we can see bearish candles and on Tuesday a bullish Pin bar. Monday has shown us the direction of the week where the price continued moving down to the first support level.

Second thing I have mentioned was if the price creates a bullish price action signal around $1.09860 that would be an indication the price will move up and we can enter the market.

The price formed a bullish Pin bar on Tuesday which was a signal to enter into the market. Pin bar formed on the support level and on the uptrend line of the short uptrend channel that is visible on the chart.

We have a strong wick reaching support level and a small body that was still inside a short uptrend channel.

On Wednesday the price had a hard time to move up and formed a bearish candle where the day closed below the previous candle body which was a small indication the price had some trouble moving higher. And the wick on the candle reached almost the same low level as the candle the day before.

On Thursday we again have bearish candles where the price closed again below the previous candle body which suggested the price had some problems.

On Friday we have a candle that has a large wick on the upper side almost reaching the downtrend channel line which is currently resistance. And from there the price returned back down where the day ended below previous candle lows. 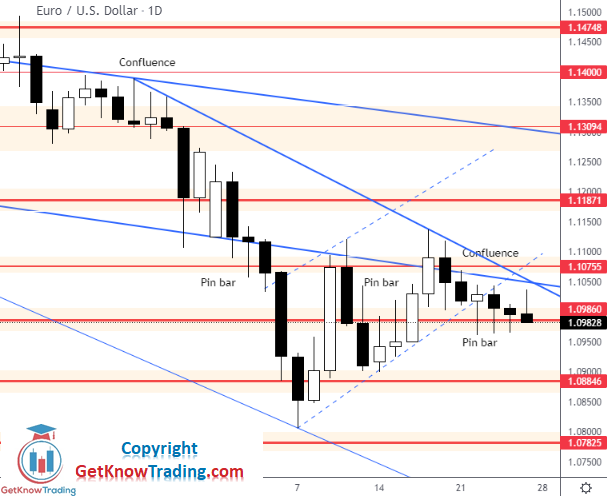 How the previous week ended the price suggests further decline because each day has closed below the previous day. Which means the price has a hard time to maintain prices on the higher levels.

But, because the candles are small and I see wicks on both sides, upper side and down side, the price is currently in the indecision area.

The price is squeezing and we could see strong moves when the price broke outside. On the down side we have a $1.09860 support level and then targeting $1.09000 level.

We can see that the price from Tuesday is outside a small uptrend channel which means it has lost bullish momentum. And from Tuesday we have a small triangle that broke above, but there was no confirmation of the breakout. Instead the price returned back down and closed the day below the previous day candle body.

This time I will wait until Monday to see what the price will do. Will the price break below $1.09860 which will mean further decline or it will break above which will target $1.10755. 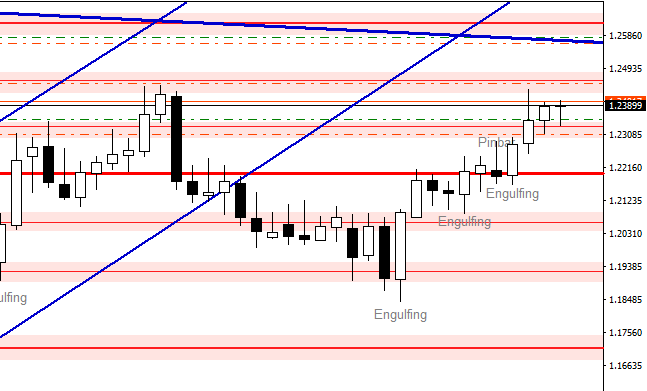 GBPUSD Analysis TodayPrevious GBPUSD forecast talked about moving higher from the $1.22000 price level. The price started the week with a bearish Pin bar that was suggesting a move down. The Pin bar formed right on the support level, but the support was without...

END_OF_DOCUMENT_TOKEN_TO_BE_REPLACED 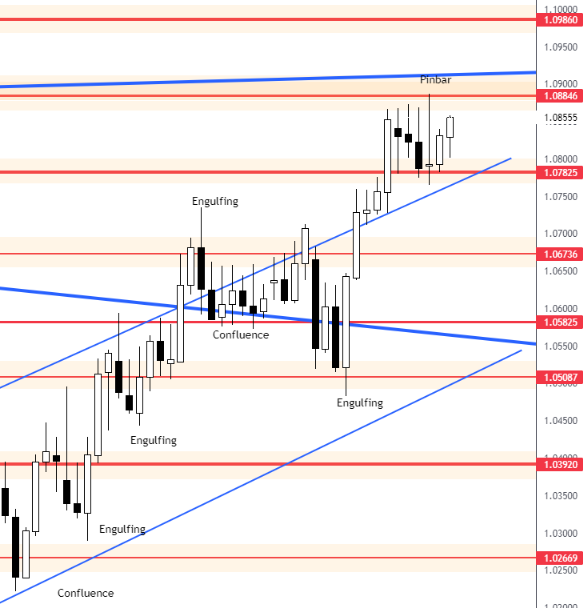 EURUSD Analysis TodayPrevious EURUSD forecast talked about $1.08846 as a resistance that need to be broken in order to continue to move up. And it was mentioned that the price is in between support and resistance level, between $1.07825 and $1.08846, and it needs to...

END_OF_DOCUMENT_TOKEN_TO_BE_REPLACED

EURUSD Analysis TodayI am collecting ideas which currency pairs would you like to see analyzed? Let me know by filling the form. Click the button and give me your idea.Entry EURUSD: If you want to see how to play this scenario join G-Trader If you want to know how...

END_OF_DOCUMENT_TOKEN_TO_BE_REPLACED

GBPUSD Analysis TodayI am collecting ideas which currency pairs would you like to see analyzed? Let me know by filling the form. Click the button and give me your idea.Entry GBPUSD: If you want to see how to play this scenario join G-Trader If you want to know how...