Twin trading is a trading strategy where you reduce risk by dividing one large trade into several smaller trades with same stop loss level and different take profit levels.

Forex trading for beginners can include this strategy so let me explain the whole trading strategy and Forex risk management strategy by several examples in trading with live quotes.

Twin means double trade, but with double smaller lot size than initially planned one trade. If you have planned to open one trade with one lot size, 1.00 lot size, then you would open a twin trade where one trade would be 0.5 lots and second trade 0.5 lots.

This is a minimum this trading strategy should use. You can use more than two trades, but two trades are minimum. If you want to you can divide one lot, 1.00, to three trades. Each trade with 0.33 lots.

At the end you will have two trades open at the same price, with same lot size, but with different take profit levels.

If you want you can use Twin Trading in Forex by dividing a trade you want to open in the Forex trading platform.

Forex market or any other market that requires to open different sizes of the trade you can use a twin trading strategy. Whether it’s the stock market or cryptocurrency market it does not matter.

Let’s say you want to open one trade with 1 lot. That means you will divide that trade into two separate trades with 0.5 lots.

If you want to open buy order with 1 lot then you would open one 0.5 lot trade and second 0.5 lot trade. Have in mind that you can open more trades and not only two. You can open 3 or 4 trades, but the lot size will be different for each trade.

Let’s put this into a formula.

You have three variables:

Formula says that you need to divide the lot size you want to use with the number of trades.

If we put numbers into the formula we will have the following.

I want to open four trades with a lot size total equal to 2 lots with 10 pips stop loss and 10 pips take profit.

This means each of four trades I will open will have 0.5 lot size.

When you open each trade you will take the profit level of each trade on a different level.

If you open buy order your:

Why to Use Twin Trading

Up to now you have seen that the idea is to open more trades with smaller lot sizes instead of one trade with a large lot size.

Why would you do this? Why split one trade into several smaller trades when you can simply open trade.

Each trade you open will have a different take profit level with the same stop loss level. This means you will have the same risk per each trade, but the profit will be higher on second and following trades.

The reason is behind the market uncertainty where you do not know where the price will move.

You see, there are many combinations the price can move and you cannot predict all the time 100% the right direction.

Check the following so you understand this more clearly.

Twin trading strategy offers you price locking and risk management in one.

These two things are the main things in each trade. With each trade you want to make money, and if you predict the wrong direction you want to lose as little as possible.

But, that is not so easy. To maximize profits and to minimize the loss. Would not that be the best stuff if you just know how to do it?

Let me explain how this works.

When you use twin trading techniques you will use the profit of each trade to lower the risk on the following trade after that trade.

If the first two trades are positive you will use that profit to lower the loss if the third and fourth trade ends as losing trades.

If we put this analogy into examples with numbers you would get this.

I will open four trades with 4 equal lot size. And that is:

Take profit will be equal to:

We will divide four trades into four equal pieces so each trade will have take profit of 20 pips.

One thing to note here. There is a Twin trading strategy where you divide 20 pips take profit with the number of trades. If that is 4 trades you will have

First let me show you an example where 1st trade will have 20 pips take profit.

Now, let me explain how each trade will look. Below is a table with four trades and the first trade has a 20 pips target.

Second trade has 20 pips larger take profit and that is 40 pips.

And the fourth trade has an 80 pips target.

You can see that you have four trades with equal risk included and that is $50.00.

If the market turns against you immediately when you open trades you will lose $200. And if that happens in any risk management strategy you cannot avoid that.

But, if the market starts to move in your direction using a twin trading strategy you will minimize the risk.

Let me show you several scenarios.

If you do not use Twin Trading technique you would have open one trade with 20 pips stop loss and 20 pips take profit.

If the trade closes with loss you would have -$200 on your account.

If the trade closes with profit you would end up with $200 profit.

It is a simple scenario which usually most traders use in trading. 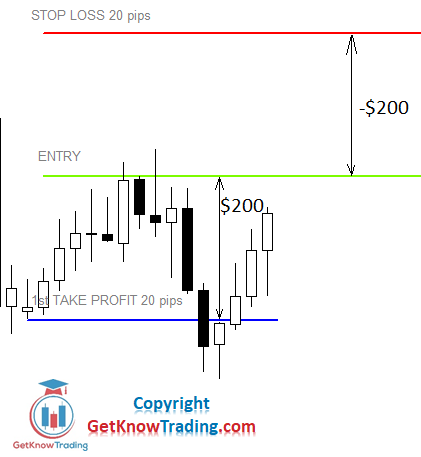 There is a second option you can use and that is Twin Trading with multiple orders where you split one order into several.

How many orders you want to have depends on you. But at least two trades should be used.

I will show you one example how Twin Trading will increase the profits you can make from the trade you want to open. And after the first trade is closed you will see how you can minimize the risk and increase profits by modifying the rest of trades that are open.

Example will be with four trades where each trade have 20 pips stop loss.

Lets imagine first trade closes with profit. And that is 20 pips with 0.25 lot gives you $50 of profit.

Now, you have $50 of profit on your account and three trades open that can close in loss if the market turns around and goes against you.

Market turns around and closes all other three trades you have open.

Now, you have $150 of loss on your account and one trade that has closed with $50 of profit.

Now, you have $150 of profit on your account and two trades open that can close in loss if the market turns around and goes against you.

Market turns around and closes the other two trades you have open.

Now, you have $100 of loss on your account and two trades that have closed with $150 of profit.

You have ended up with $50 profit. That is great because compared with the scenario where you would open one trade with 1.00 lot with 20 pips loss and lose all $200. 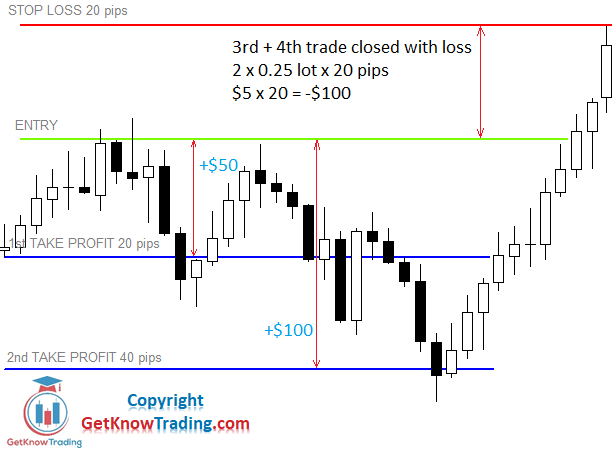 Now, you have $300 of profit on your account and one trade open that can close in loss if the market turns around and goes against you.

Market turns around and closes one trade you have open.

Now, you have $50 of loss on your account and three trades that have closed with $300 of profit.

You have ended up with $250 profit. That is great because compared with the scenario where you would open one trade with 1.00 lot with 20 pips loss and lose all $200 or if it turns into profit you would end up with $200 profit. 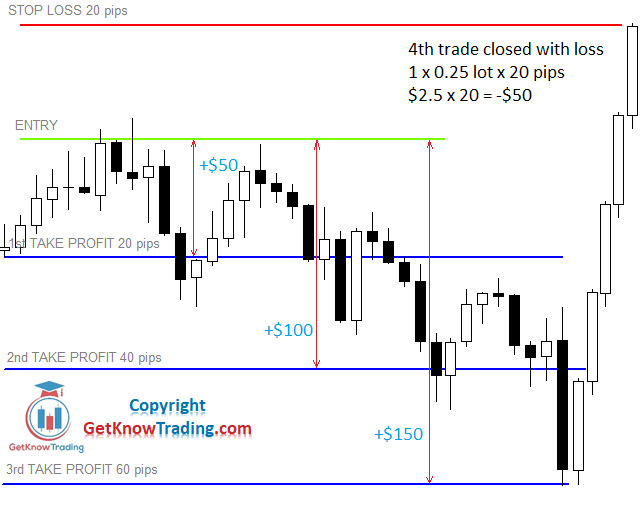 Now look how the risk difference is visible when you use single trade risk and multiple trade risk.

You compare risk on each trade and if you have profit on one trade you minimize total risk.

Stop Loss in Pips per Trade

You can see that with all negative or one negative trade you would end up with loss.

Three negative trades gives you -$150, but with $50 of profit from first trade you end up with:

If you have two positive trades you add that profit to the negative result from two negative trades.

In the table you can see what happens when you have 3 positive trades and one negative.

You remember the first scenario when the first order was closed with profit?

That is when the first order has closed with $50 of profit and three trades were still open.

By locking profits technique in Twin Trading you will move stop loss of three trades that are open above or below entry point depending if you have open buy or sell order.

The goal here is to prevent making three orders being closed with stop loss.

After the first trade is closed and the market turns around moving to the entry point where you have three orders open you will prevent price closing three trades with loss.

When you move stop loss above or below entry point you will make three orders being in profit instead of closing with loss.

This is the same as trailing stop function which you have in a trading platform.

In the second way of trading with Twin Trading technique you can divide the profit level on four equal pieces.

So, if you have 20 pips as take profit you would have:

Now, the first trade will have 5 pips take profit.

Second trade will have 5 pips more and that would be 10 pips take profit.

When the trade reverses and comes back to your stop loss you will end up in profit. That profit can be higher than initially planned take profit where you can make more than $125.

Second thing that is important here is risk management. With this way you lower risk on second, third and fourth trade when the first trade is closed with profit.

Stop Loss in Pips per Trade

Let me explain how I got the second and third row so you understand the table.

2nd row I got with 1st trade in profit:

When I sum these two positive trades I get:

Now you understand how the table is filled.

In this case you would end up in profit only if you have  three trades positive and only one negative. You would have $25 profit.

So, you can see how each time loss is decreasing as 1st, 2nd and 3rd trade is positive instead of having $200 loss on each trade.

We can see from the table that while the risk remains constant for a single order, there is a constant decline in risk for multiple order trading with each position closed. 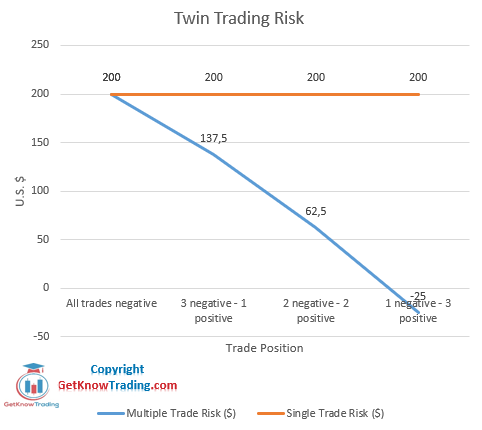 ← Previous Article
Was this helpful? You can support my efforts by buying me a coffee 🙂

What is Forex Trading for Beginners

What are Forex Currency Pairs